The Summer Ice-Lolly-days Are Here!

Summer’s fab for nostalgic memories. So many things that were the garnish to the main dish of non-stop, long, hot summer days (I know… they weren’t really like that except for 1976… but with my hippy-style rose-tinted nostalgic glasses on they were) and which are now long since gone.

Where to start on the nostalgia fest?

Where better than at “The Chocolate Box” – the little sweetshop at the end of our road when I was little.

And on those hottest of hot summer days, it was the buzzing white chest freezer in the sweetshop that became of extra special interest… the one with Walls stickers all over it.

Or maybe Lyons Maid… I forget.

But it was crammed with ice creams and ice lollies – veritable treasure memories in 2020.

There were so many fun ice lollies… lollies very much of their moment but one thing that really takes me back isn’t a lolly at all.

…it’s what we used to have in a cornet…

…a brick of vanilla ice cream that came wrapped in paper. You peeled off the paper and plopped the brock into the conveniently shaped rectangular cone… et voilà.

I genuinely thought for many years that vanilla was another word for boring!

Maybe that was the marketing department trying to make it a bit sexier!

Good luck with that!

Occasionally we’d have a variation on the theme… an ice cream sandwich… 2 rectangular wafers with the block of ice-cream in the middle… which frequently turned into a right drip-fest because you had no cornet to funnel the drips and the 4 sides of the sandwich to defend at the same time!

I remember a 2 Ronnies song where they sang (same tune as the advert) “Just 1 Cornetto, give it to me…. Not flipping likely, they’re 50p!” At the time pretty well every other lolly would have been 15p or 20p tops from memory… so they were a rare old treat!

Also did you know that Roger Moore (007 himself) was allegedly, apparently involved in the creation of the Magnum (or maybe not, depending on who you believe).

Finally, I’m on a roll, did you know that Margaret Thatcher (yes, that one!) worked for J Lyons (as in Lyons Maid) and allegedly, apparently created soft scoop ice cream by whipping air into it.

Who knows if those are really true or not… but they’re good stories!

Anyhow… back to firmer ground… feast your eyes on this little lot… bring back any memories?

And a little later… after decimalisation…

My all time favourite’s in there… can you guess which one?

And I chomped on many a Count Dracula too… purple lips agogo!

Can you see the jokes on the lolly sticks in that image? Why on earth did they stop those? You got to read the question when you started your lolly and you had all of the licking, slurping time to work out what the answer way.

It was a brilliant concept…. so why did they spoil the fun and stop printing the jokes???

Back to the lollies… cocktail anyone? I don’t recall this lolly… was it nice? It doesn’t seem right a 7 year old going into a shop and asking for a Brandy Alexander… that’s just plain wrong!

They made a Pina Colada one too… I’d have given that a whirl, even at 7…

I was rather partial to this cider flavoured lolly…. remember it?

… a smooth, rich toffee centre… banoffee on a stick if you like.

Last but not least, and even I’m too young to remember this (just), did anyone ever try this lolly with surely the best name ever?

Just imagine walking into a shop… 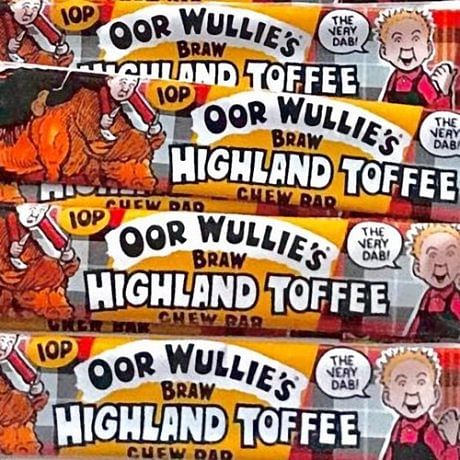